What does the latest research tell us about what makes community business successful, and about its impacts on the local area?  And what might we conclude about the parts of Birmingham and Sandwell that make up the USE-IT! programme area?

The headline from the first study is that it’s a tough thing to measure.  Surveys of people living close to a well-established community business were compared to areas without a similar community business.  And the results?  Maybe surprisingly, it showed not much difference in measures of community cohesion and individual wellbeing.  But as the researchers point out, this was the first time a survey like this has been run, so we’re not looking at trends over time.  And a key point is that community businesses are often established in those hardest-hit communities where these measures of cohesion and individual wellbeing are already low, so drawing direct conclusions is hard.  They’ve got a baseline now, so future surveys will make the picture clearer.

The second study makes interesting reading on social business.  Local and social firms help create and sustain a vibrant locality with community interaction.  What factors help that to happen in a neighbourhood?  Interestingly for the USE-IT! area, researchers noted things like … a high percentage of Non-Western immigrants that accommodate a considerable share of starting entrepreneurs, fomenting local ethnic economies… and … close-knit, relatively low income communities with a distinct cultural ethos…

Birmingham and Sandwell have a rich mix of ethnicities and countries of origin.  The percentage of the population not born in Britain has been rising in recent years – which you can see from the graph (they’re only estimates, because the last full national census was in 2011)[3]: 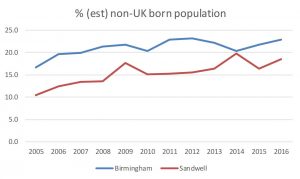 For those not born in Britain, the top ten countries of origin in the West Midlands as a whole are India, Pakistan, Poland, Ireland, Jamaica, Bangladesh, Germany, China, Zimbabwe and Kenya.  That’s a pretty wide spread from which to draw entrepreneurs able to service the wants of a wide variety of local markets.

The key lesson from the research is that our area is fertile ground for determined, aspiring social entrepreneurs to start up new enterprises.

The USE-IT! programme is here to encourage social entrepreneurs to take the plunge!