15 February, 2019
UncategorizedComments Off on Tim from Co-op & Community Finance Reflects on Future Co-ops, two weeks on ! 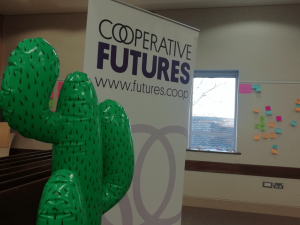 So, how do we make Co-op Deserts Bloom? That was the topic and challenge presented to us at the 2019 Future Co-ops conference we sponsored this year.

As Coop News had already reported, the conference this year was designed to be one of ‘active participation’ led by Think Digital, a department of the Central England Co-op retail society, rather than your conventional sit and listen format. The two day event took us on a journey of discovery, storytelling, conundrums, outcomes and pledges; oh and a quiz based on an old hardware store brochure, thrown in for good measure.

So, what are my take away thoughts and reflections, two weeks on?

My first reflection was about how we reach new audiences and engage a younger voice.

What came out from the event was a need to simplify our language and messaging. I think sometimes as a sector we get too wrapped up in our own sector terminology, academic speak and technical jargon and, although we try and pull away from this in outward messages, it can be really confusing for a potential new audience and leads to disengagement at an early stage.

This was driven home by a younger voice in the room. Emily Pittaway, a work placement student with Co-op Futures, said she was confused by what a Co-op is and said that simple wording and stories were needed to reach out to new and younger audiences. Initial messaging like ‘want to feel valued at work’ should be used as a hook to get people interested rather than messages that try to promote messages about the Pioneers or attempts to encapsulate what a coop is in a just a few words or fix all 7 principles into one sentence which just become too clever and more complex. It was suggested that working with influential Youtubers or online celebrities that endorse the model or align with co-op principles could be the way to go.

Keeping it real, simple, emotive and relational were the take away messages on reaching new audiences.

The group I was part of were tasked with ideas on ‘How to help co-ops grow’. The focus of our activity was around working together and forming Secondary Co-ops, co-ops that are formed when two or more operational co-ops come together to promote their services, sometimes called federal co-ops. Arghh! wait a minute, remember ‘language Timothy!’ Oh yes, I also forgot to mention earlier to also keep away from generational popular culture references!

So, more simply Secondary co-ops are co-ops owned by other co-ops to create bigger co-ops! The idea was put forward by Vivian Woodell CEO of the Phone Co-op Foundation and Director of the Co-op Loan Fund  who suggested we need to ‘turbo boost’ the co-op sector and help meet the ambition of doubling the size of the sector by 2030, as established in the Co-ops Unleashed report , the sector should look to form secondary co-ops focussed on growth and scalability. Investment and resource were identified as big challenges, but some practical steps were identified including; looking back at why secondary co-ops failed in the past, and picking a particular sector where a secondary co-op might work well for a pilot and benchmarking.

The main message was that something seismic needs to happen if we are to double the size of the sector and as Jo White, organiser and Executive Director of  Co-operative Futures, put it “we can’t wait for jam tomorrow we need to act now”.

My final reflection relates to my particular pledge (all attendees were asked to write down a pledge/ positive change which will be sent back to us as a reminder in six months time) to help co-op deserts bloom. My pledge was to explore risk capital for start-up worker co-ops.

We see a reasonable amount of support through grants for start-up community businesses – the recent launch of the Bright Ideas fund is testament to that – but start-up worker co-ops seem to have been left out in the cold and have been for a long time. Support for SolidFund is building, and its self help support from the sector network will certainly help but may find it hard in its infancy to help support the dramatic growth in co-ops needed.

Co-operative and Community Finance  and the Co-op Loan Fund have funds to lend to both growing and start-up businesses but both have its members and shareholders to consider, so high risk start-ups with no assets or history can be difficult especially in competitive or new sectors.

So, who might capitalise a ‘give it a punt’/ venture capital/ equity fund for new worker coops? Well at the moment I don’t rightly know but I’m happy to explore options and if you have any ideas or suggestions, or can help me in my pledge, I would love to hear from you.